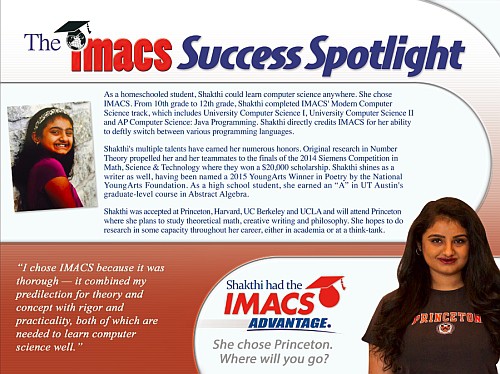 Congratulations to IMACS graduate Shakthi Shrima who will attend Princeton this fall.

As a homeschooled student, Shakthi could learn computer science anywhere. She chose IMACS.

Shakthi’s multiple talents have earned her numerous honors. Original research in Number Theory propelled her and her teammates to the finals of the 2014 Siemens Competition in Math, Science & Technology where they won a $20,000 scholarship. Shakthi shines as a writer as well, having been named a 2015 YoungArts Winner in Poetry by the National YoungArts Foundation. As a high school student, she earned an “A” in UT Austin’s graduate-level course in Abstract Algebra.

Shakthi was accepted at Princeton, Harvard, UC Berkeley, and UCLA. She will attend Princeton where she plans to study theoretical math, creative writing and philosophy. She hopes to do research in some capacity throughout her career, either in academia or in a think-tank.

For Shakthi, IMACS was a crucial step of her journey to Princeton.

“I chose IMACS because it was thorough – it combined my predilection for theory and concept with rigor and practicality, both of which are needed to learn computer science well.”