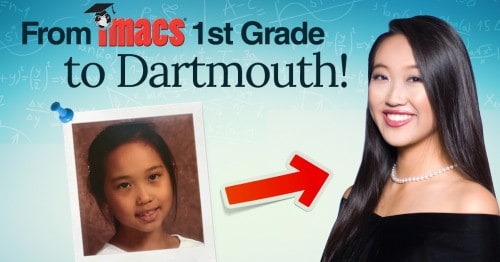 Congratulations to IMACS graduate Snow Kang who is beginning her studies at Dartmouth.

In addition to being selected as a National Merit Finalist, Snow was named Cadet of the Year by the Florida Wing of the Civil Air Patrol and won 1st Place at the National Cadet Special Acts Competition.

With a 5.5 GPA, 1580 out of 1600 on the SAT, and 800 on the SAT Math II exam, Snow was accepted at Dartmouth, UC Berkeley, NYU, Vanderbilt, Wellesley, and the University of Miami. She chose Dartmouth, where she plans to double major in Computer Science and Economics and eventually pursue a career in cyberlaw or cybersecurity.

Snow credits IMACS for the way she thinks and approaches every aspect of her life:

“IMACS is the one place that doesn’t teach you steps to get to a specific solution but rather how to use logical and creative thinking to develop your own solution. It is the embodiment of everything learning should be.”