What is mathematical logic?

What do mathematical logicians study?

Where and when did mathematical logic originate?

Although the study of logic in the language of math is relatively new, the study of logic in human languages is very old. One of the first thinkers in the field of logic was Aristotle. Aristotle’s logic was more like the sort of logic you might use to write an essay– he dealt with arguments, fallacies, language, and the other kinds of things a debate coach would teach you. For centuries, logic was only expressed through speech and writing. However, a few hundred years ago, the field of mathematical logic began to develop. 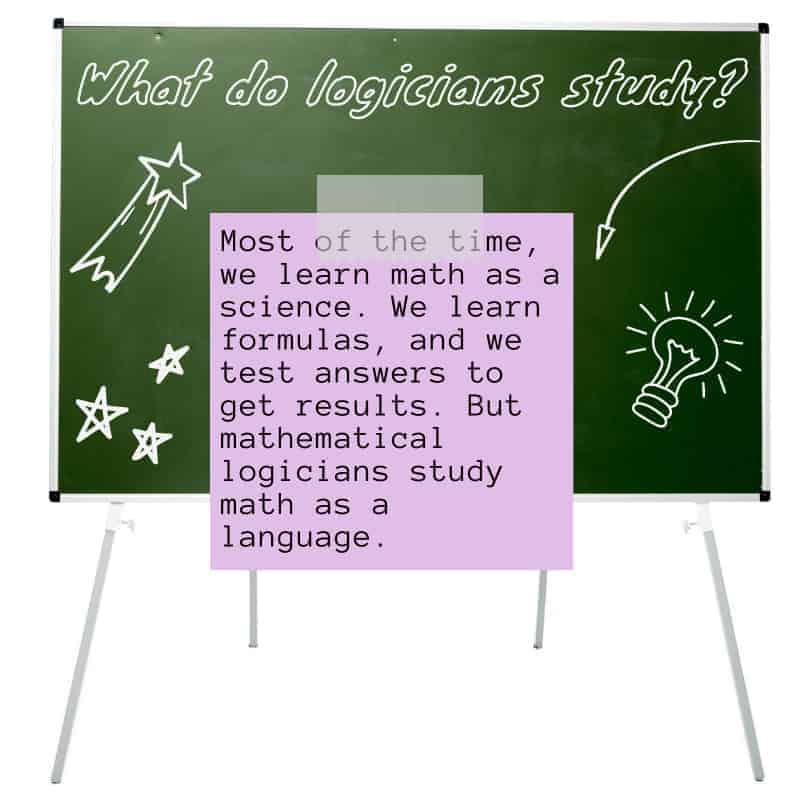 What is the difference between classical logic and mathematical logic?

In the beginning, mathematical logic looked pretty similar to Aristotle’s logic– it just used symbols instead of words. Although mathematicians mostly agreed that this new idea was powerful and influential, they had a harder time agreeing on the new language of symbols. It wasn’t until George Boole invented Boolean logic in the 1800s that mathematicians could agree on a universal logic language.

The languages that we speak in our everyday lives– English, Chinese, Spanish, etc. –are known as “natural languages.” This means that they evolved naturally through thousands of years of humans trying to get better at communicating with each other. Mathematical logic, on the other hand, is a “formal language.” That means that its grammar and vocabulary were constructed intentionally by mathematicians and logicians to serve a specific purpose.

While formal and natural languages are different in many ways, they also have a lot in common! They both have specific rule sets, known as grammars. In English, grammar might tell you to change a verb based on when its action is happening: he runs vs. he ran. In mathematical logic, grammar might tell you that you can’t use an “or” operator to replace an “xor” operator (pronounced “Ex-Or”; we’ll learn what this means in a few paragraphs). Both grammars have the same effect on the language: they help writers generate expressions with consistent structures, and they help readers decide if a “sentence” is correct or not.

Mathematical logic and the human mind.

Have you ever wondered what makes humans so different from other animals? Scientists have wondered this too! About twenty years ago, three linguistic scientists named Marc Hauser, Noam Chomsky, and W. Tecumseh Fitch set out to argue that what makes humans so unique is how we understand language and communication. Humans have a particular area in our brain called Broca’s area. This part of our brain allows us to be much better at processing and understanding language than other animals. Our brains have allowed our languages to have something very unique: grammar! 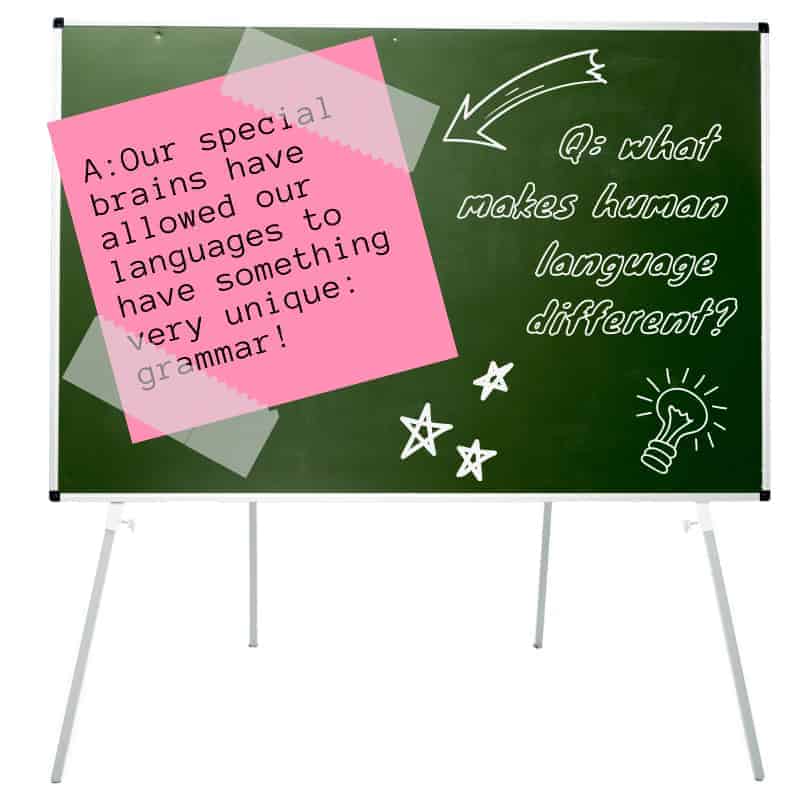 While other animals have methods of communication, Hauser, Chomsky, and Fitch claimed that human language has a far more complicated structure than other languages. Human grammar allows us to talk about things that happened in the past, things that will happen in the future, and even things that might happen, but we’re not sure about yet. Those are some pretty complicated ideas! Mathematical logic is based on how good we are as humans at understanding structures and patterns. Mathematical logic evolved from Aristotelian logic, which evolved from human speech and language. The biggest thing that mathematical logic has in common with the language you speak every day is its strict structure with clear rules. So, while those rules may look very different from the grammar rules you learn in school, your ability to understand them comes from the same special part of your brain!

Would you be good at mathematical logic?

The theory of multiple intelligences.

Gardner also suggested the possibility of a ninth category: existential intelligence. Those with strong existential abilities would have an aptitude for considering deep and profound questions and deep empathy and understanding for humans on a broad societal level, not just an individual level.

Many other psychologists and researchers disagree with Gardner’s theory. They point out that he does not have much scientific evidence to back his ideas up. They argue that his intelligences are closer to a personality quiz than an empirical scientific theory. And while this may be true, you might still find Gardner’s theory useful to gain a better understanding of your own interests and the way you prefer to learn.

According to Gardner’s theory, logical-mathematical learners are usually very organized and systematic. They think in clear and linear terms, making them very good at mental math and memorization. They also use patterns and sequences to absorb information– for example, logical-mathematical learners might have a precise planner or to-do list system. Simultaneously and paradoxically, they are comfortable with abstractions because of their ability to extract patterns and find consistency. Logical-mathematical learners are also heavily reliant on rules and structure. They will seek them out or make them if they are in a situation with few dictates, and they might feel anxious or less confident without regulations and routines. They also will probably feel frustrated when those around them ignore procedures. 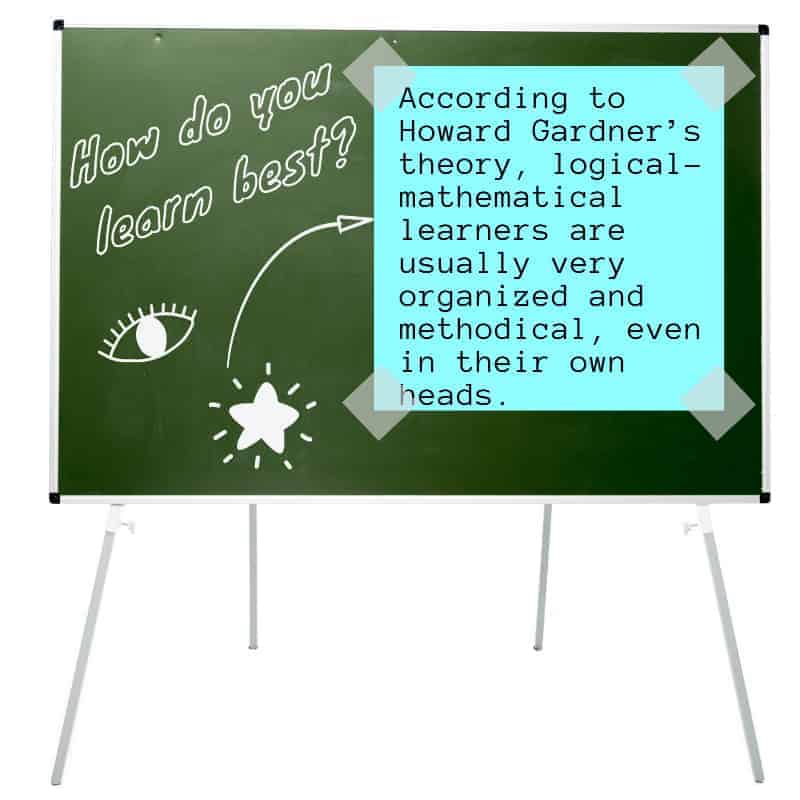 How can you get better at mathematical logic?

Can you develop logical mathematical intelligence?

Many people seem to believe that being “good” at math is something you are born with. They see math skill as a talent that can only be strengthened if you have a “natural gift.” This is false. Your math ability is like a muscle: getting better at math is a lot like getting better at running or weightlifting! The way to improve your logical mathematical intelligence is to exercise that muscle. Like any exercise routine, it is essential to choose challenging activities and dedicate yourself to doing them regularly. 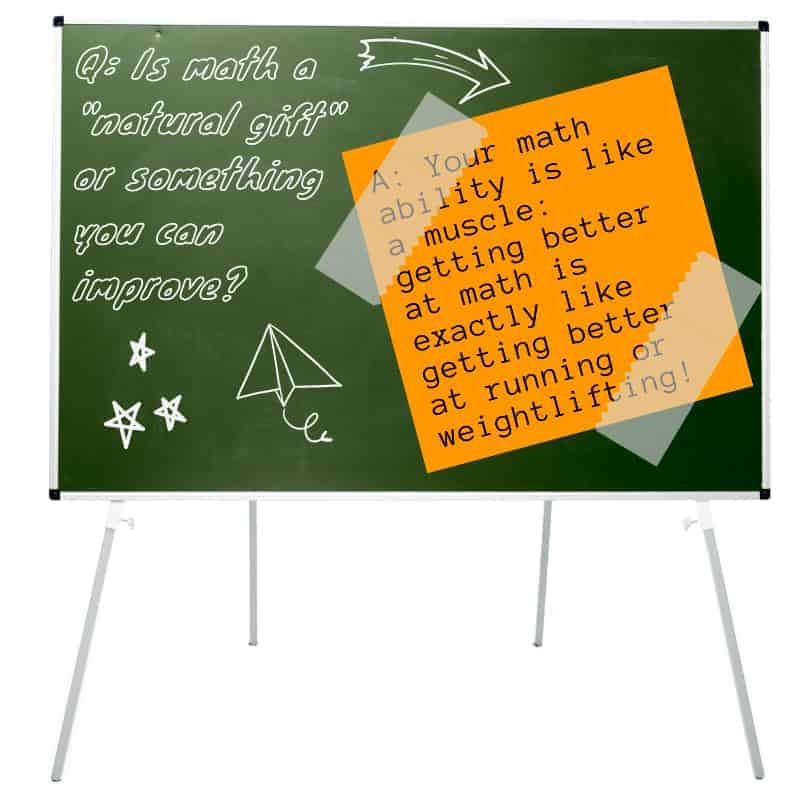 What jobs are well suited for people with logical-mathematical intelligence?

While there should be no pressure to decide on a career without exploring plenty of subjects and paths, you will likely enjoy a career in STEM fields if you enjoy building your logical-mathematical intelligence skills. Whether you want to develop next-generation machine learning at Apple or AI language models at OpenAI, the most cutting-edge tech research requires powerful analytic skills. Being a researcher, professor, mathematician, data scientist, computer programmer, or even a doctor are interesting jobs that reward well-developed mathematical intelligence. Even if you are interested in other types of work, growing your logical-mathematical intelligence will help you in everything from the debate team to robotics, from planning a complex landscaping project to making a roster and tournament schedule for a sports team.

How do you learn and practice your mathematical logic skills?

One of the biggest and most well-known branches of mathematical logic is Boolean logic. And while Boolean logic can be incredibly challenging and difficult, its building blocks are so simple that anyone can understand them! 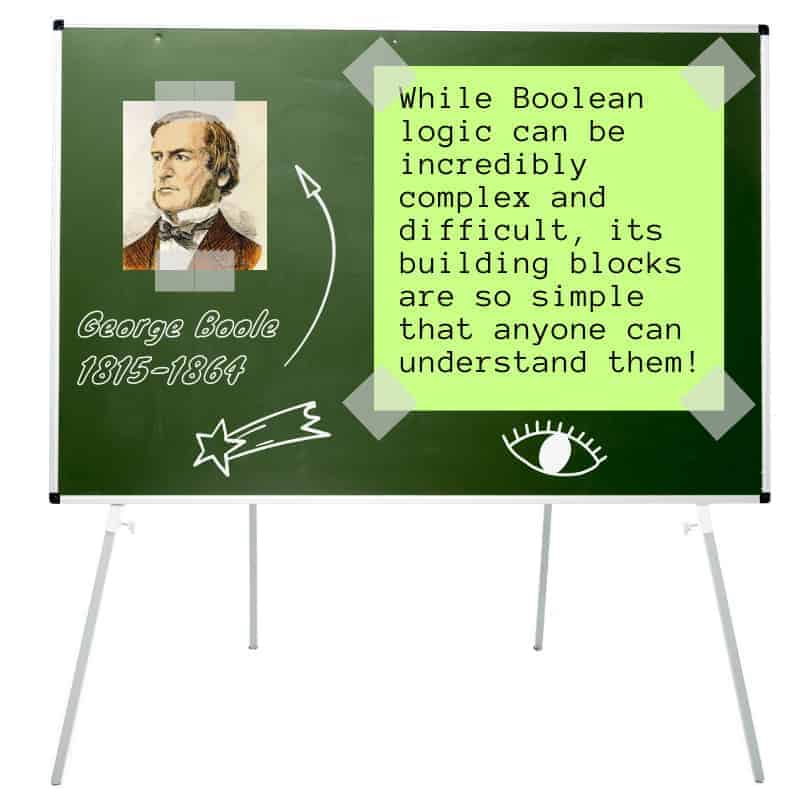 Let’s look at a truth table for “Annie and Sam went to the store.”

What are the basic Boolean logical operators?

Instead of using the operators of the math that you are used to– plus, minus, times, divide –Boolean logic uses the operators “and,” “or,” “xor,” and “not.” There are other operators, too, but these are the most common. For most operators, just like in our example with Annie and Sam, there are two inputs (called “truth values”) and one output. Each operator has its own rule set that tells you how to respond to different combinations of inputs. The truth table shows the outputs corresponding to the combination of inputs you enter. Let’s look at the truth tables of the most common operators:

How “AND” works in Boolean logic

Compare this to our truth table about Annie and Sam going to the store above. Did you notice it is the same? Here, in this Boolean truth table, we have represented “No,” “Not,” and “False” with a “0” and “Yes” (“True”) with a “1”. As you can see, the AND operator outputs a “true” answer if (and only if) the first and second inputs are true. Thinking about Annie and Sam, can you guess what the other operators might do?

Here is the truth table for OR.

Imagine asking if Annie or Sam are going to the store. Do you see why our output is “1” (or “True”) in three of the four possible cases?

“Or” is a word we use every day in English, but we don’t use the next one: “XOR” ever. Nevertheless, XOR is a conjunction of two words that you do know: “exclusively or.” Do you have a guess about what the truth table for XOR might be?

Here is the truth table for XOR

The truth table for NOT:

Now that we know the rules of the most common operators let’s use them to solve a few problems! In our problems, we will use switches and lightbulbs to represent problems and solutions. “On” means true, or one, and “off” means false, or zero.

We will solve all of these problems on the logic.ly website. Before we start you should head over there and play around with the tool!

We’ll start with a tutorial. Let’s try to turn a lightbulb on and off with one switch. First, we will drag a toggle switch from the menu into the workspace. 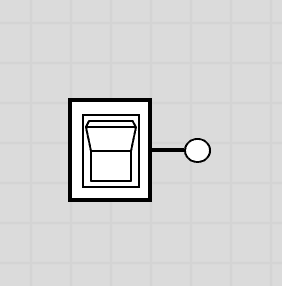 Then, we will drag a lightbulb into the workspace. 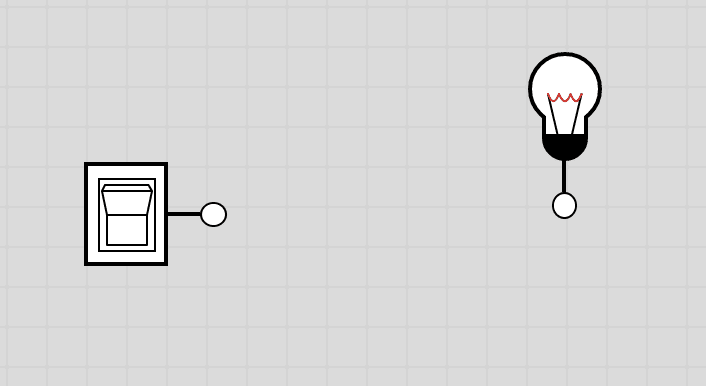 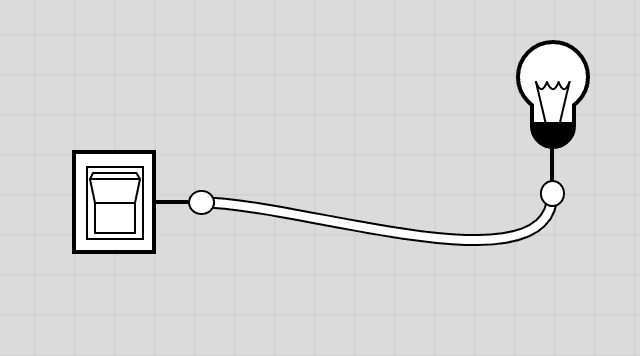 Now, by clicking the switch, we can turn the lightbulb on and off! 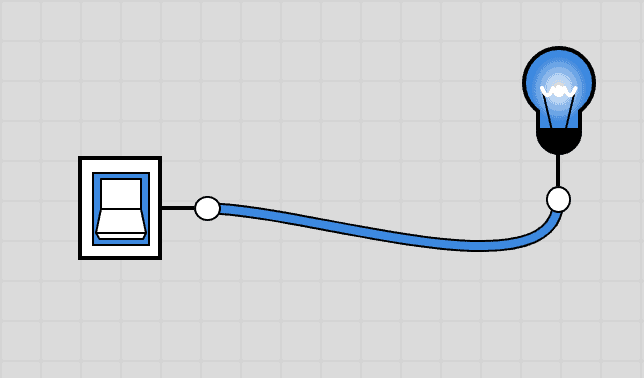 Great! Now here are some fun problems to try. All of the following exercises should be completed here: https://logic.ly/demo/

If you want to check your answers, you’ll find the solutions at the bottom of this blog article. If you enjoyed these Boolean logic problems, IMACS classes would be an excellent option to further develop your mathematical and logical skills while having a lot of fun!

What books and courses will strengthen your logical-mathematical intelligence?

Logic games and puzzles can be great exercises for your mental mathematical muscles. These can be found in books you work through on your own or in courses you work through with a knowledgeable teacher and peers. Here are some great books and courses to improve your logical-mathematical intelligence:

Some of our favorite mathematical logic books:

One of the most famous books on mathematical logic is a book with the unsurprising title: Mathematical Logic, by Joseph R. Shoenfield. This book is among the pioneers in the field and is an excellent resource for learning advanced mathematics logic concepts.

What is Mathematical Logic? by C.J. Ash

Where to find mathematical logic courses?

Most mathematical logic courses are not taught until university. The field is often considered too complex for younger students to learn. However, for younger students with a passion for math or computers, IMACS offers courses that teach mathematical reasoning. This is a perfect stepping stone for future logicians. IMACS makes mathematical logic fun and engaging and will improve the problem-solving skills of any eager student. For advanced secondary school students, IMACS offers a university-level logic course. Read more about what our alumni have to say about IMACS and try a free placement class to learn more.

Turn a lightbulb on and off with two switches, but the lightbulb will only be on if any switch is on. 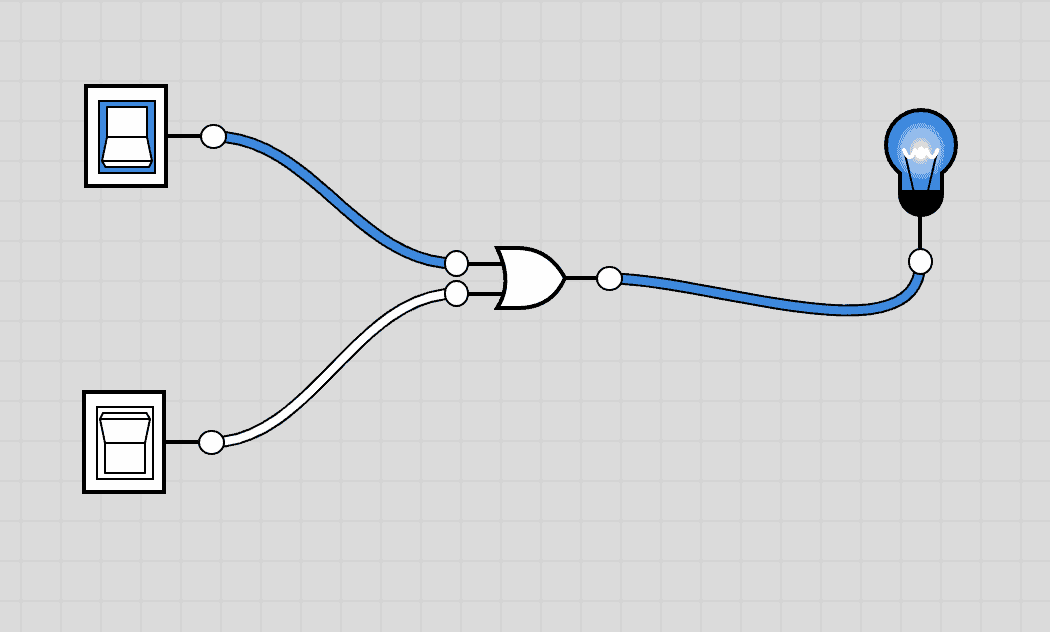 If you solved this problem correctly, you can also turn the lightbulb by having both switches turned on. 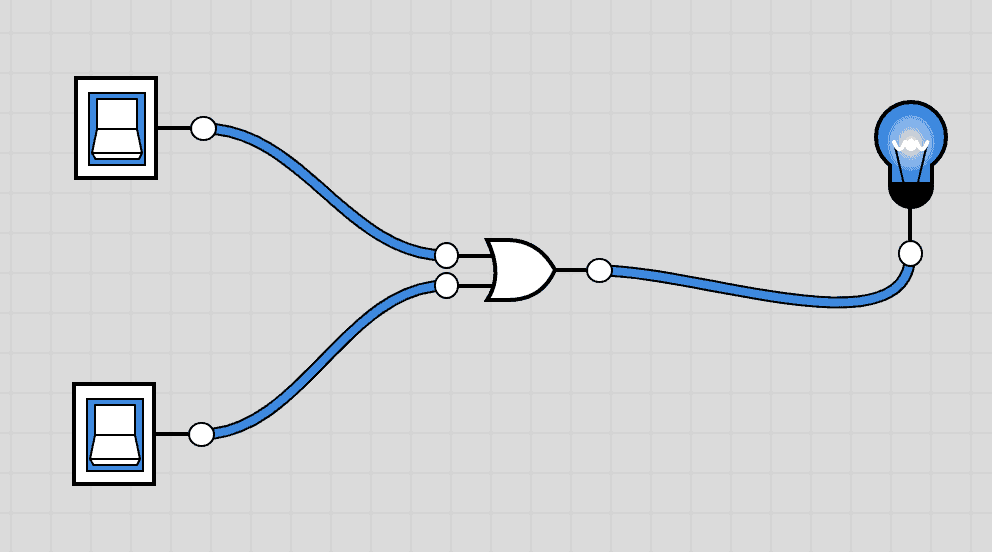 Turn a lightbulb on and off with two switches, but the lightbulb can be on if either switch is on, but not both. 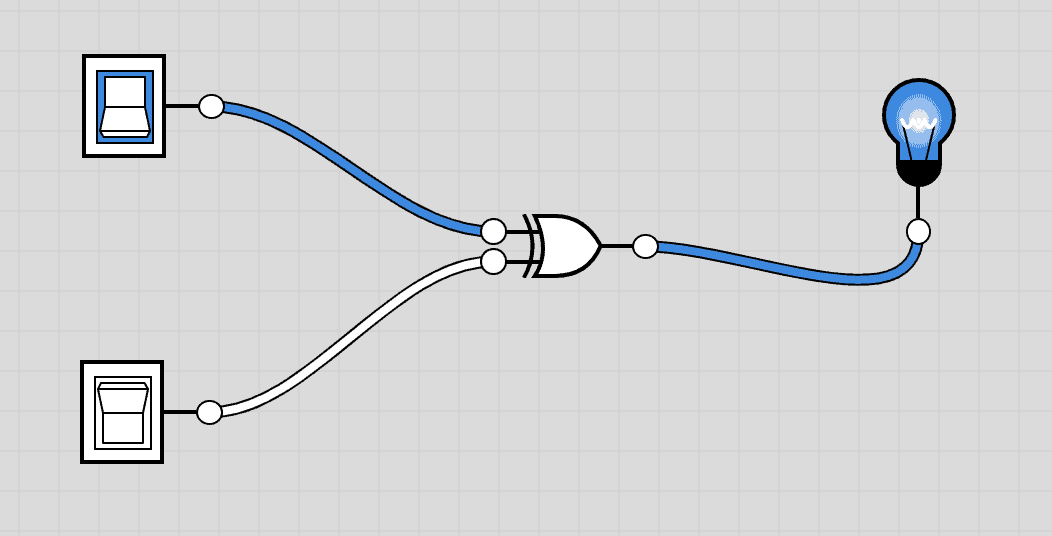